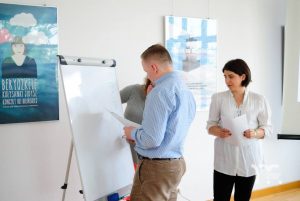 This is one of the first programs in all of Poland aiming to bring Jewish culture and tradition closer to home rather than focusing on pre-war history and the Holocaust.

Ever wonder, why Jewish women cover their heads after marriage? Why Orthodox men wear payot? How long is the Jewish year that follows the lunar calendar and what are all the different holidays? Do Jewish in Poland have the same traditions as Jews in Morocco or Spain? Can and can’t you do on Shabbat? To be a Jew do you have to come from a Jewish mother? 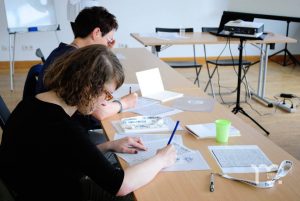 This program consists of addressing these fundamental questions but also the stereotypes associated with them. On a day to day basis we tend to ignore or not recognize the problems brought up by stereotypes whether they are positive or negative. Most commonly this is brought forth by a simple lack of knowledge about Jewish culture. To fill the void that is unknowingly created by the educational system, the program “Alef-Bet Jewish culture” was born! It is adaptable to formal and informal methods of education.

The program consists of 22 different topics! (22 is also the total number of letter in the Hebrew alphabet.) The starting point of teach topic is rooted in tradition and transitions into how it is practiced in modern life.

Within Krakow this program is organized in partnership with the Krakow JCC (Jewish Community Center). During the school year we conduct 3 parts of the program. It will take place over the course of 2days toward the end of the winter holiday for Małopolska (within this time it could be possible for it to lead into Shabbat, this includes a Shabbat dinner with the local Jewish community of Krakow). Sections II and III are within the same day.

Our program can be order for educational and cultural institutions!
Please feel free to reach out to us at olga.danek@mifgash.org.pl

Coordinator of the project:

Coordinator of the project “Between Kraków and Jerusalem” and anti-discrimination workshops
Małgorzata Kucharska
tel. +48 509 845 105
e-mail: malgorzata.kucharska@mifgash.org.pl
Please follow us