Between Kraków and Jerusalem 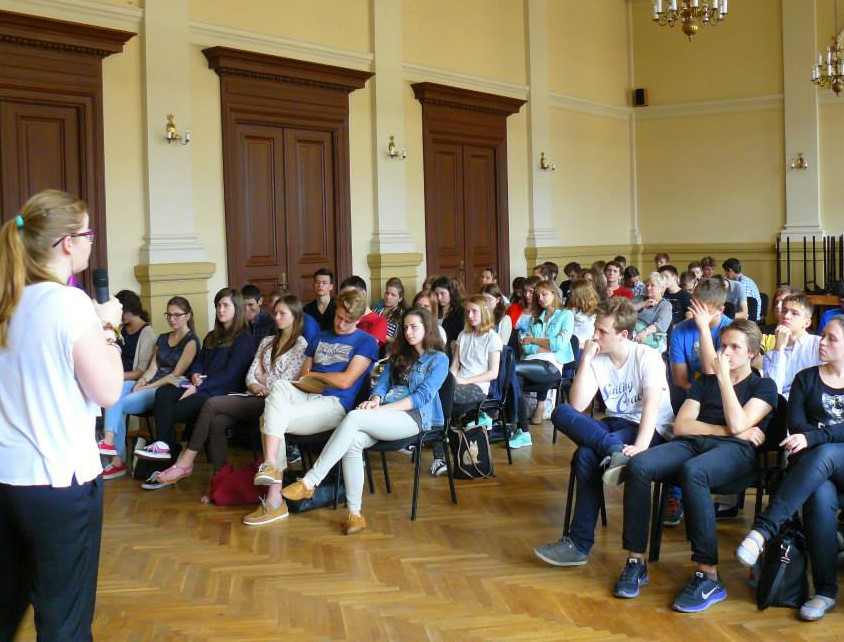 The program Between Krakow and Jerusalem is a series of classes directed towards middle school and junior high school students. In our class our focus is centered around topics that are not commonly covered in contemporary studies. With in our classes we try to help students understand Jewish culture, while trying to break stereotypes. Our program goes beyond the city limits of Krakow and stretches out into neighboring city upon prior consultation.


Lessons can be ordered as a block session (e.g. Holocaust or Krakow’s Jewish History) but also as individual classes.

Judaism is one of the world’s largest three monotheistic religions. Due to being the oldest of the three, Christianity originally began with Jews. Unfortunately this information is typically forgotten. The first purpose of this lesson is to familiarize young people with the main tenets of Judaism. In addition to show the main festivals and holiday that are found within the religion. Within the lesson there is the incorporation on many different teaching styles which allow students to remain engaged during the course (talking, group work, brainstorming). By creating an open and supportive environment, students can freely ask questions without discouragement.

The Holocaust and the persecution of Jews during World War II it was know that in the streets of Kaimierz were filled with Jewish life. But what about before? How did Polish Jews function in Christian society that was hostile towards them? Did Jews across all of Europe face these issues? How did the rest of the world see them? Alas, most of these questions are still unanswered when taught in schools. Contemporary studies focus exclusively on the Holocaust instead of giving a full perceptive on Jewish history as is done with other cultures. Even though Jewish history is heavily intertwined with the fabric of European history. We aim to bring the Jewish history closer to home rather than having it be seen as a foreign object.

The problem of anti-Semitism still emits a lot of emotion. On a day-to-day basis anti-Semitic are not brought up with a classroom. However, anti-Semitism appears regularly within the media in Poland and across the world. With the current political climate of Israel there is a divide between countries that support Israel and those who oppose it. In Europe this it does not stop the anti-Jewish slogans that are chanted at anti-Israel rallies. There have also been incidents of Jews being harassed on the streets, attacks on Synagogues and other Jewish buildings. Due to these types of incidents and the individuals that carry them out it is commonly said that Muslim youth is anti-Semitic. However, it is not fair to blame all of the world’s anti-Semitism into one specific demographic. After all you can find swastika graffiti anywhere in the world, even at sporting events it is possible to hear anti-Jewish slogans chanted. There are also a lot of jokes that have turned into stereotypes over the years such as “dirty Jew” or “rich Jew”.
During this lesson students will be exposed to how the depth of anti-Semitic issues form both a historical and a modern view. The main goal of this class is to make young people aware of the prejudice against Jews and also learn the tools to combat prejudice.

The premises of this lesson is to help young people familiarize themselves with the history of the old Jewish quarter of Kazimierz. Thanks to the power of multimedia students will be able to take a virtual walk throughout some of the most beautiful and sadly forgotten places around Kazimierz. Students will learn the basic concepts of religious practice and the parts and functions of a synagogue. This will aid in the creation of a connection between the past and present. It will also tackle the important subject of Polish Jews turning the Second World War. This lesson is a combination of three time zones: the past, the present and the future of the Kazimierz district. This allows students to learn about contemporary Jewish life: the JCC Krakow, the Galicia Museum, the Jewish Culture Center, and the event that is famous every summer, the Jewish Culture Festival! By understanding the basics of Kazimierz and the people who live in it, this opens the door for students to appreciate the community on a new level. Students will acquire priceless knowledge of local history, which is likely to be used in the future.

The Holocaust – from the idea to the crime

The Holocaust or Shoah marks the murder of near 6 million Jews if not more during the course of World War II. This lesson will begin from the early origins of anti-Semitic thought leading up to the Holocaust. There will be a great focus and emphasis on local history of Krakow, including the Ghetto and Płaszów concentration camp. There will be a usage of film and pictures.

The Holocaust and pop culture

The Holocaust has been written about in many different perceptive. It is not only telling a story through history but thorough art. This lesson on the Holocaust presents the general tendency of how the media has seen it through art, literature and film. During the course of the class students will be looking at some of the most controversial works referring to the Holocaust (especially comics). There will be a focus on the commercialization of symbol, slogans and locations that are associated with the Holocaust.

The Warsaw ghetto uprising of 1943 is commonly spoken when people talk about Polish heroism during the Second World War. However, when people are asked who Tadeusz Pankiewicz or where the Krakow Ghetto is, answers are far and few to come by. The primary goal of this lesson is to show the acts of Polish heroism that happened within Krakow during German occupation. Students will learn what the General Government was and how its was implemented. Also what the Ghetto in Krakow was and why it was not in Kazimeierz. Along with what the purpose and function of the Płaszów camp was. We will also feature important figures and institutions related to Jewish life in Krakow during the war.

March ’68 the Jewish exodus from Poland

In March of 1968 several occurrences changed the social landscape of Poland. There were protests at universities because of the censoring of the play Forefathers’ Eve directed by Kazimierz Dejmek. It should be know that during this time there were also a great deal of anti-Zionist campaigns run by the state containing anti-Semitic characters. This directly resulted in thousands of Polish Jews leaving Poland. This lesson focuses on the growth of anti-Zionist tendencies leading up to the occurrences in March of 1968.

The image of Polish Jews often end about 5 years after World War Two. Sadly Jewish life is forgotten in Poland even though there are thousands of years of culture and history living through the Jews living here now. This lesson is suppose to teach about how Jewish life in Poland is being revived. Not only are there rabbis who are striving to provide Polish Jews with the religious experience, but there are organizations creating a cultural experience. This class will answer any questions students may have about Judaism in modern Poland.

After nearly two thousand of being in the diaspora the Jewish people have returned to the Promise Land of Israel. The very fact the state of Israel has been restored is a phenomenon in of itself! The class does not focus exclusively on historical events but shows more of the phenomena of modern Israel: religious, cultural, linguistic or ethnic. Israel hold many secrets like the Mehsahy from Mea Shezei who speaks Yiddish or the Jews from Ethiopia who prays in Geez, and even a soldier of the Israeli Defense Forces (IDF) who speaks only Hebrew and even Arabic.

The role of woman in Judaism

What is a mehitzah? How chala or nidda are understood? What does hadlakah look like? Can a woman study the Torah? Does she have to go to the synagogue? When Simchat Bat ceremony organised? Who celebrates the bat mitzvah? Who is an agunah? What do the Jewish engagement and marriage look like? During the class “The role of woman in Judaism” you will discuss those and many other topics. You will learn what responsibilities does a Jewish woman have. We will present the role of woman in both orthodox and reform Judaism. The information will be demonstrated via multimedia presentations, photos, fragments of films and music.

Israel and its inhabitants

Israel is undoubtedly a special place. On one hand strongly secular like Tel Aviv, on the other as religious as ultraorthodox neighbourhoods of Jerusalem. Tradition alternates with modernity there. A great number of religions and ethnic groups coexisting in such a small space makes it an exceptional and interesting topic to discuss. The educator wants to tell you about Israel full of contradictions dispelling the most common stereotypes.

The aim of the workshops is to broaden participants’ knowledge about Judaism and Jewish culture. Students learn about the Jewish cycle of life from birth until the burial and about ceremonies cultivated during the Jewish life. Deriving from biblical tradition some rituals are cultivated until nowadays in the modern Jewish life. Thanks to the workshops students can learn about the influence of Judaism on everyday life of Jews both in diaspora and in Israel. Participants can find traces of Jewish life in Kraków from before the war which is reviving nowadays.

Jewish holidays: tradition and the present

Holidays both religious and secular are very special for every community. During those days tradition alternates with contemporary life. Moments of glory or sadness are commemorated, old customs are cultivated and new ones are being introduced. For the Jewish diaspora celebrating the holidays for ages was a way to feel common with other members of the People of the Book and nowadays for Israelis the holidays help to strengthen their national identity. The aim of the workshop is to show teenagers the Jewish customs thanks to various resources used during the class. The educator wants to excite a reflection about the role of holidays and spirituality in humans’ life.

Coordinator of the project

Coordinator of the project “Between Kraków and Jerusalem” and anti-discrimination workshops
Małgorzata Kucharska
tel. +48 509 845 105
e-mail: malgorzata.kucharska@mifgash.org.pl
Please follow us